Israel is the crossroads of world history, the Apple of God’s Eye.

But in the middle of all the rich, amazing culture and tradition, there are many who are suffering – orphans, widows, and victims of terrorism. Right now, Israel is facing new waves of terrorist attacks, from bombings to crop burnings. And the people who suffer the most are the ones most in need of care: widows, orphans, and the poor.

King’s Ransom has an office in Israel led by a Levitical Rabbi, who oversees the care of thousands who cannot care for themselves. Through his hands: 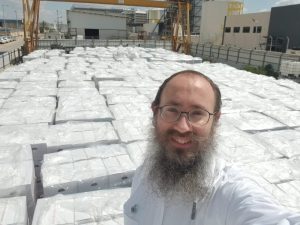 Thousands of boxes of food and supplies to distribute to orphans and widows in Israel, thanks to you.

– We provide food and financial support to widows who have no way to provide for themselves (many of whom have children to raise).
– We are partnered with another rabbi who has raised thousands of orphans into successful adults. Together, they have built a city run entirely by adults and young people who grew up in his care.
– We provide post-traumatic counseling to victims of violence.
– Our rabbi is also a volunteer firefighter, so he is literally on the “front lines” of terrorist attacks that involve bombings and fires.

When you designate your gift to Israel, 100% of it goes directly there and our rabbi disperses it according to the mandates outlined by Moses thousands of years ago. You are literally walking in the Torah!

The map ID you have entered does not exist. Please enter a map ID that exists.